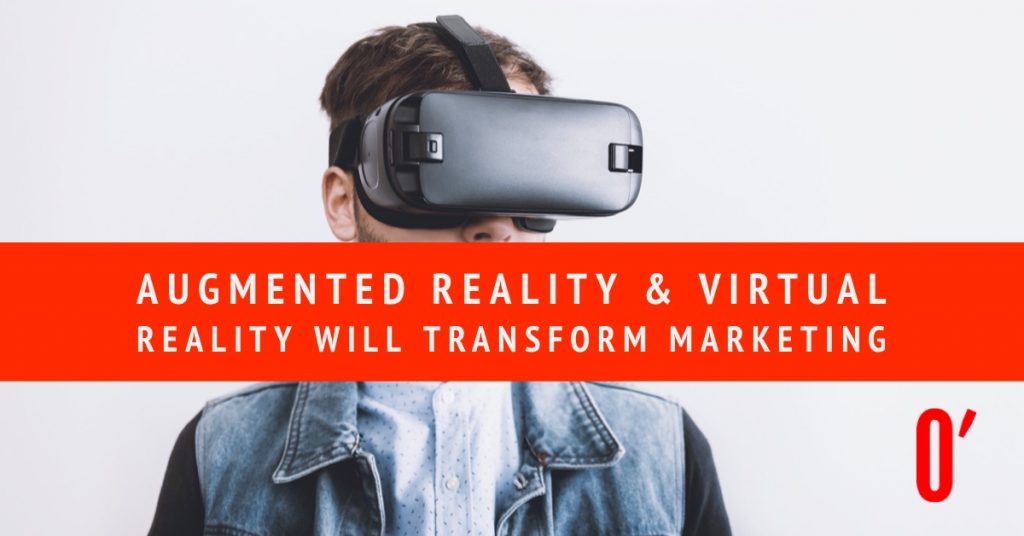 By now you’ve probably seen the 19 Crimes wine label that comes to life. If not, you should click that link because it’s a super fun party trick. But they aren’t the only company to create the buzz around AR & VR, OEA has too.

Today we’re talking about some “Twilight Zone” marketing where worlds come to life, and pictures jump off the screen.

According to dictionary.com, Augmented Reality (AR) is defined as “a technology that superimposes a computer-generated image on a user’s view of the real world, thus providing a composite view.”

In layman terms, it doesn’t alter a user’s environment, but it does alter the images allowing the user’s world to become interactive or digitally manipulated.

By comparison, Virtual Reality (VR) is similar, but opposite in the fact that it is completely immersive. VR actually replaces a user’s environment with a simulated one. There are a wide range of VR devices from cardboard (whatttt!) to sophisticated and very expensive products that can transport a user to a completely different reality.

Last spring, OEA was part of the team that launched Liberty Tax’s “You Do Life, We Do Taxes” corporate branding campaign. Using augmented reality through a free smartphone app, we animated the image of Ulysses S. Grant on Liberty Tax collateral and on real $50 bills. This campaign allowed Liberty Tax filers a $50 incentive to send a friend to Liberty Tax to have their taxes done, and it actually ended up winning the HRPRSA 2018 Pinnacle Award.

Although you may have only recently heard of these technologies, the use of AR/VR is growing among people and businesses. According to a study by Snapchat’s parent company, Boston Consulting Group (BCG), more than 80 million Americans are engaging with this technology each month. BCG is also reporting a surge in this technology and projects that there will be more than 120 million users by 2021 in the U.S. alone.

National brands are also testing AR ads, which allow customers to virtually try on their products before purchasing. AR is also having an effect on the automotive industry. Recently a campaign for carmaker Kia combined an AR experience with a click-to-messenger campaign that drove a 46% increase in inventory searches, and a 20% increase in daily calls to dealerships channeled directly from Kia’s messenger experience. This data shines a light on how AR & VR will transform marketing in the next couple of years, and OEA is ready.

Take advantage of this technology now, before it becomes just another idea you passed on. Be a pioneer and let OEA help you transform reality, and create immersive marketing ads that no one will be able to forget.