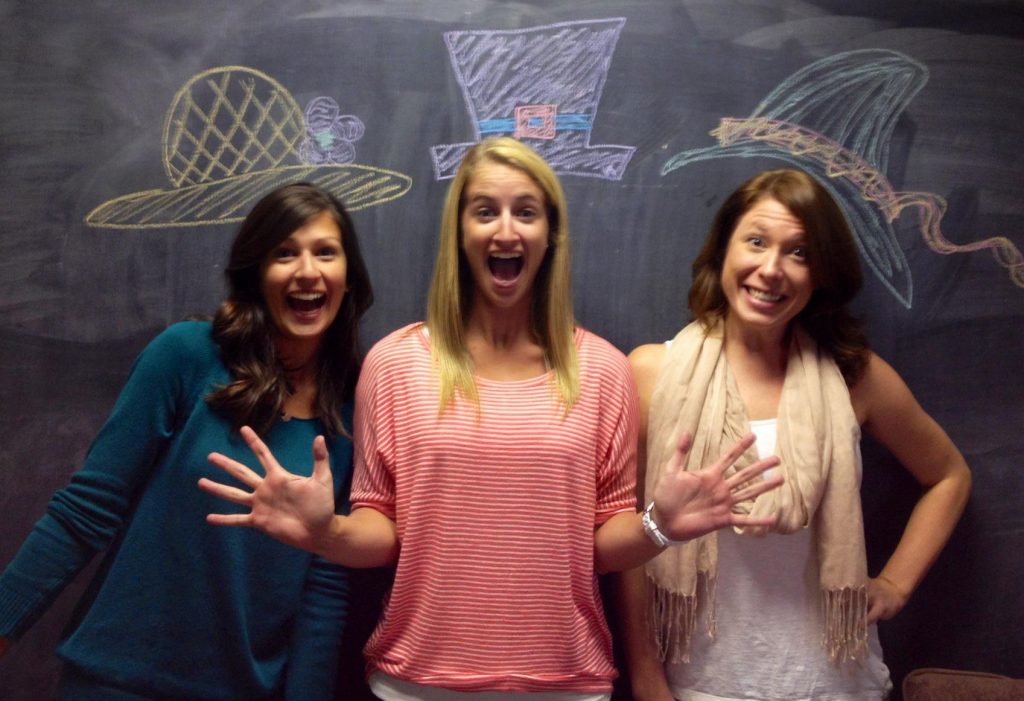 Here at OEA everyone has their usual lunch crew. The “3 Musketeers” or “Charlie’s Angels” as they’ve been dubbed by some, consists of Julia “JHerdz” Hernandez, Katie “Fumbles” Buchanan and Lauren “Bacon” Wilson. The nicknames came from our Video Director Jon…we’re not exactly sure why.

1. What is your position at O’Brien et al. Advertising?

2. What do your responsibilities entail?

J- I assist the Account Executives with anything from researching to writing work requests to taking meeting notes and everything in between. And I maintain a lot of the OEA social media…perhaps including the blog?
K- I put my superhuman hearing and eyesight to the test in the fight against typos and subpar VO. I’ve also been known to gallivant as a photographer, shooting and assisting with a variety of client projects.
L- I am responsible for opening all projects and tracking them from initiation to completion. I serve as a liaison between Creative, Account Service, Interactive, Production, Video, Public Relations and Media Departments. My responsibilities also include, but are not limited to: scheduling, prioritizing, timesheet review, routing and management of all projects

3. How long have you been with OEA?

4. What do you have in the trunk of your car right now?

J- Ask my lunch companions K&L, my car is usually a mess. But I cleaned it out so now the only thing in the trunk is a soccer bag and a vehicle emergency kit (safety first!)
K- A reflector, a water bottle, a doggie hammock and assorted fake moss and dirt courtesy of various prop plants. P.S. I think Julia cleaned her car out ahead of time because she knew this question was coming.
L- A kickball. A pair of roller blades. 3-4 beach chairs. A blanket. Random car repair items (fuses, a funnel, light bulbs, etc.). A poster of the 2011-2012 Norfolk Admirals.

5. What job did you have in high school?

J- Every restaurant job imaginable in the vicinity of Ghent and Downtown Norfolk. Doumars, Tropical Smoothie, Yorgo’s, 456 Fish, San Antonio Sams.
K- I worked at Landis – the local pharmacy. A friend and I also somehow found ourselves in the painting business a couple times. We painted an entire gymnasium one summer. Talk about cheap labor.
L- I worked at a video store-  Video Unlimited. Best. Job. Ever.

J- A professional soccer player. Thanks Mia Hamm.
K- A marine biologist. I wanted to train dolphins and help save killer whales just like in Free Willy. My mom was thrilled that I had grown out of my wanting to be a waitress/dancer phase. Don’t worry, I didn’t want to be THAT kind of dancer.
L- A ballerina. Ha!
J- OMG Katie! Free Willy was my favorite movie too!

J- It’s not a fear so much as I just really have a deep, undying hatred of chalk.
K- Burning my tongue via hot beverage. I can’t risk not being able to taste my food for the rest of the week. It’s too important to me. I’m equally afraid of getting splinters.
L- Balloons and those Pillsbury containers that pop open when you peel back the paper. EEK!

8. If you could have a conversation with one kind of animal, what would it be?

J- Lauren’s dog. She’s a weirdo 🙂
K- My dogs, so they could give me the inside scoop on what’s up with Lauren’s dog.
L- My dog. I want to know why she’s always staring at walls…?

9. What is one of the most embarrassing pictures you have of yourself?

J- There really are too many to choose from. I played college field hockey at Longwood University and some of those photos are pretty embarrassing. Kudos to the photographer for capturing this shot the exact second AFTER I got hit in the face with the ball…
K- Oh, embarrassing photos…I have so many. There’s one in particular where I’m doing what I believe to be my best impression of a white tiger. Nailed it. Please also take note of the awesome amount of ninja turtle paraphernalia in the background.
L- I have plenty of embarrassing pictures, but the one taken of me at this year’s Shamrock Half Marathon is pretty awesome. I embrace my awkwardness and probably have more embarrassing pictures than normal pictures…

10. If you were a breakfast sandwich, what would you be and why?

J- I love breakfast so much! Maybe bacon, egg and cheese on a biscuit…why? Because it’s so delicious, no reason other than that.
K- Probably something weird like peanut butter, banana and bacon wrapped in a pancake. ¿Por qué? Because I’m a bit of a weirdo and much like bacon, I get along with just about everyone/everything.
L- Something simple. Bagel with ham, egg and cheese.